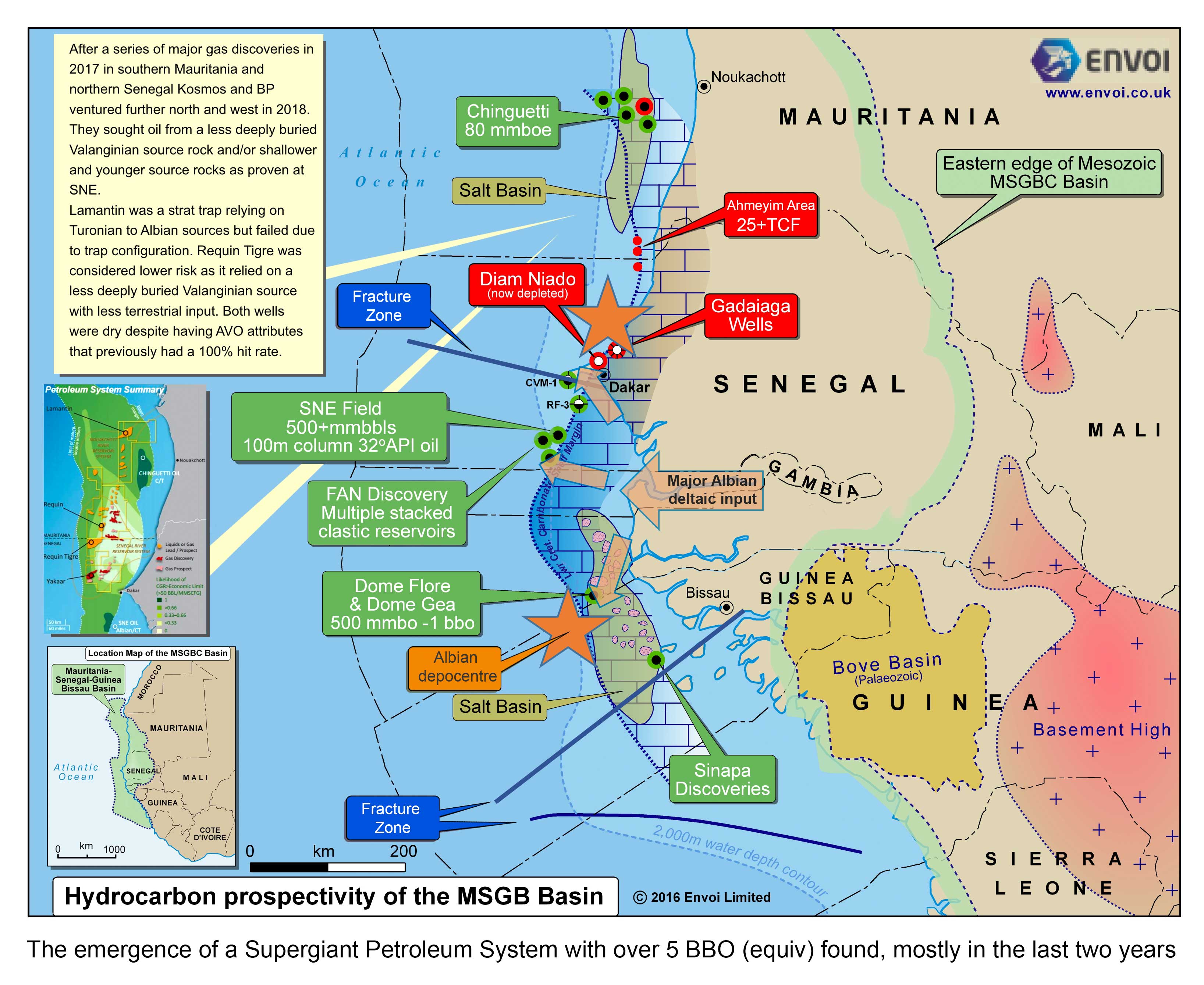 Area now known to have >1.5bn bbls and 30TCF, plans are being made for both oil and gas production to commence within the next five years.

BP and Kosmos drill a dry hole at Lamantin – chasing a strat trap with a potential charge of oil from the same source rock that delivers at SNE.

The Chinguetti field is to be decommissioned by Sterling for $30m after a disappointing production history.

The decision to develop 240mmbbls – approx. 50% of the known reserves – at SNE will be made in 2019 with the first submission in the process occurring in mid 2018. Approx. 25 wells will be used to produce an initial plateau of 100,000 bopd via a stand alone FPSO.

Far is still pursuing a legal claim to take Woodside’s interest in the SNE licence after Woodside acquired it from ConocoPhillips.

Trace are farming out their shallow water block for 3D and a well. Some 3D was shot by Far in an earlier farm out option period (not exercised) but more is required to evaluate the Antelope prospect (c. 200mmbbls) with a well likely to cost $15m.

BP and Kosmos drill a dry hole at Requin Tigre, north and on trend to Yakaar. With a large AVO anomaly this prospect had similar attributes to the existing gas discoveries in the area but it was dry.

GNPC have held presentations around the world to seek companies to take on the ex African Pet licences and other open acreage. African Pet continue to pursue legal options to recover their assets (blocks A1 and A4).

Far have mapped the Samo prospect with 800+mmbbls due south of SNE in block A2 and have farmed out to Petronas. The farm out is 2 for 1 with 40% equity going to Petronas and $8.6m of back costs. The well will cost $45m and is due to be drilled in 2019.

Oryx are actively farming out their acreage – terms are not known.

Svenska are planning on drilling in 2019 – on the western edge of their acreage.

Trace, Larsen and Supernova all actively seeking farminees with wells needing to be drilled in the next 18 months. With BEC’s block also being made available to a deep water operator there is an opportunity for a super major to secure a large acreage position in country.

Total have reportedly secured an option over all the offshore acreage for one year with a view they can select 3 blocks thereafter.

Africa Pet. announce a farm out of their A1 and A4 blocks for 3D and a well but despite this the GNPC rescinded their licenses in July and this has led to a legal dispute. Reported terms were $8.5m past costs and a full carry on 3D shoot and a well – the farminee was never identified.

Area to west of Dome Flore sees Impact farmout to CNOOC. No terms released but 65% equity will move to Nexen/CNOOC.

Oryx have moved forward with their acreage having acquired a legacy 3D shoot of just less than 2,000 square kms.

Hyperdynamics farm out half their interest in Guinea Conakry block for cash (c $8m) plus 50% of a well. Fatala well was drilled at the end of the year and reported dry.