Reconstruction of the Central Atlantic margin, with the associated accommodation issues caused by the Vema Wedge, shows a very good fit to the North American Plate with the Demerara Plateau sitting immediately south of Guinea Bissau, prior to the opening of the ocean. This means prior to opening the Neocomian Shelf edge identified in the MSGBC has a natural extension to the same aged shelf edge currently located in Guyana and Suriname, as shown on the map below right. 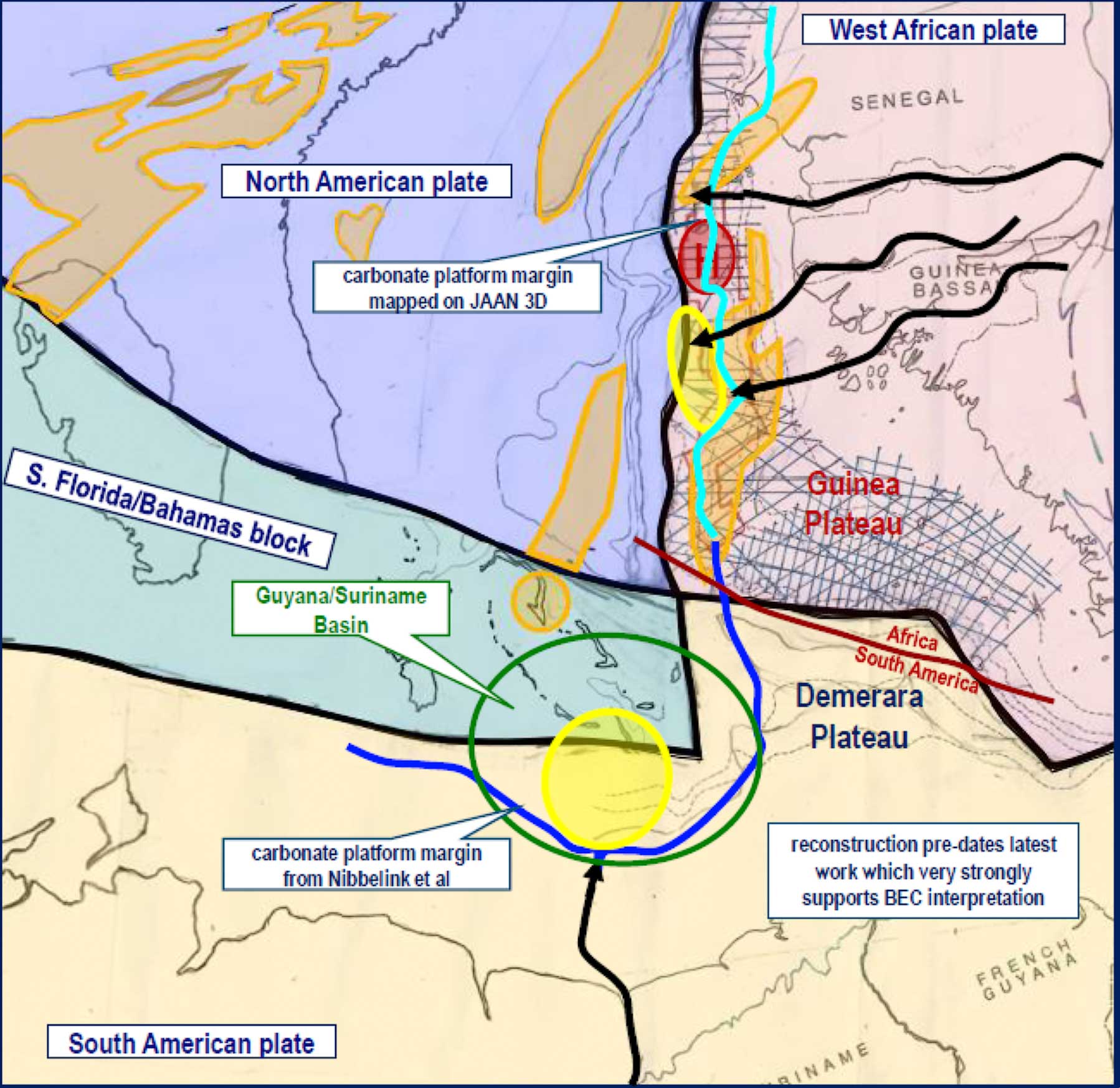 Similarities with the prolific Guyana plays associated with the Berbice Canyon running into an embayment along the Neocomian margin are clear. In the MSGBC the Geba River can be seen to have carried sediment from the Neocomian to the present day into an embayment mapped predominantly in Block 4B. Whilst the Demerara petroleum system is Turonian/Cenomanian in age and the Block 4B area is noticeably older, we do have a very similar aged set up to Guyana in the MSGBC at Sangomar. The presence of embayments sets up the perfect conditions for the accumulation of oil prone source rocks and there is also the advantage of the embayments limiting the dilution effects caused by oceanic currents re distributing the more humic, fluvial discharges.

The main and largest prospect in Block 4B is the Barremian fan which is clearly identified with discrete feeder channels cutting across the Shelf, individual sand lobes with truncation away from the carbonate Shelf Edge and injectite deformation. The average size of the main lobes is 450 sq km (the total fan area is 650 sq km) and the individual lobes measure some 50m in thickness. 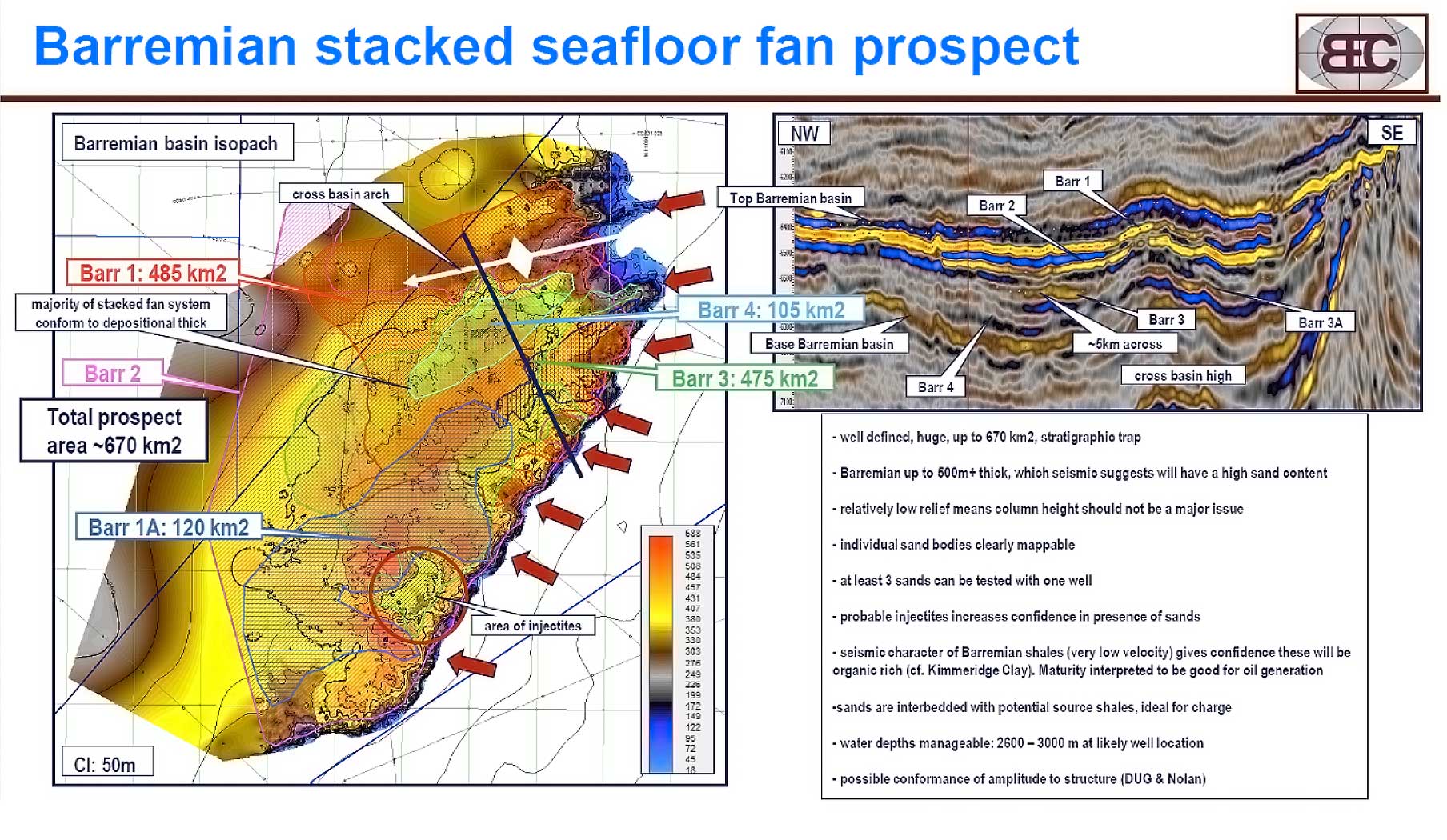 Detailed AVO screening shows the fan to have an AVO Class I anomaly if the top sand is considered to be a hard event representing a moderate quality sand encased in shale. This is the expected response, and the anomaly is present down to the closing structural contour giving an area of 173 sq km. If the soft event immediately below is considered a good quality sand then as expected, there is a clear Class II AVO and again it is coincident with structural closure. This work has been tested by forward modelling and Vp/Vs and impedance mapping.

With the size of the fans and thickness of the sand lenses any resource numbers calculate at in excess of a billion barrels. The risk with this play is the need for a good quality sand to cover off the expense of a deep water development. With no basinal well control and no way to calibrate the seismic response there is a risk, at the depth of burial, that no good poroperms exist. Nevertheless, there are several examples of early hydrocarbon emplacement preserving reservoir quality and for sure the Barremian fan would have been charged early on in its burial history.

The source rocks for the Barremian are the interbedded distal equivalents to the sand fan and the ‘soft’ seismic signature is consistent with an organic rich shale. Age equivalents are seen in the DSDP 367 and these are organically rich.

Lying above but not necessarily coincident with the Barremian fan, are Aptian sand wave and contourite stratigraphic traps that are mappable off the 3D and they have distinct Class II AVO anomalies. The contourites lie in the north of the basin whilst the sand waves are in the south, away from the main east to west channels delivering sediment across the platform. These two different sedimentary features are clearly evident on the maps below. 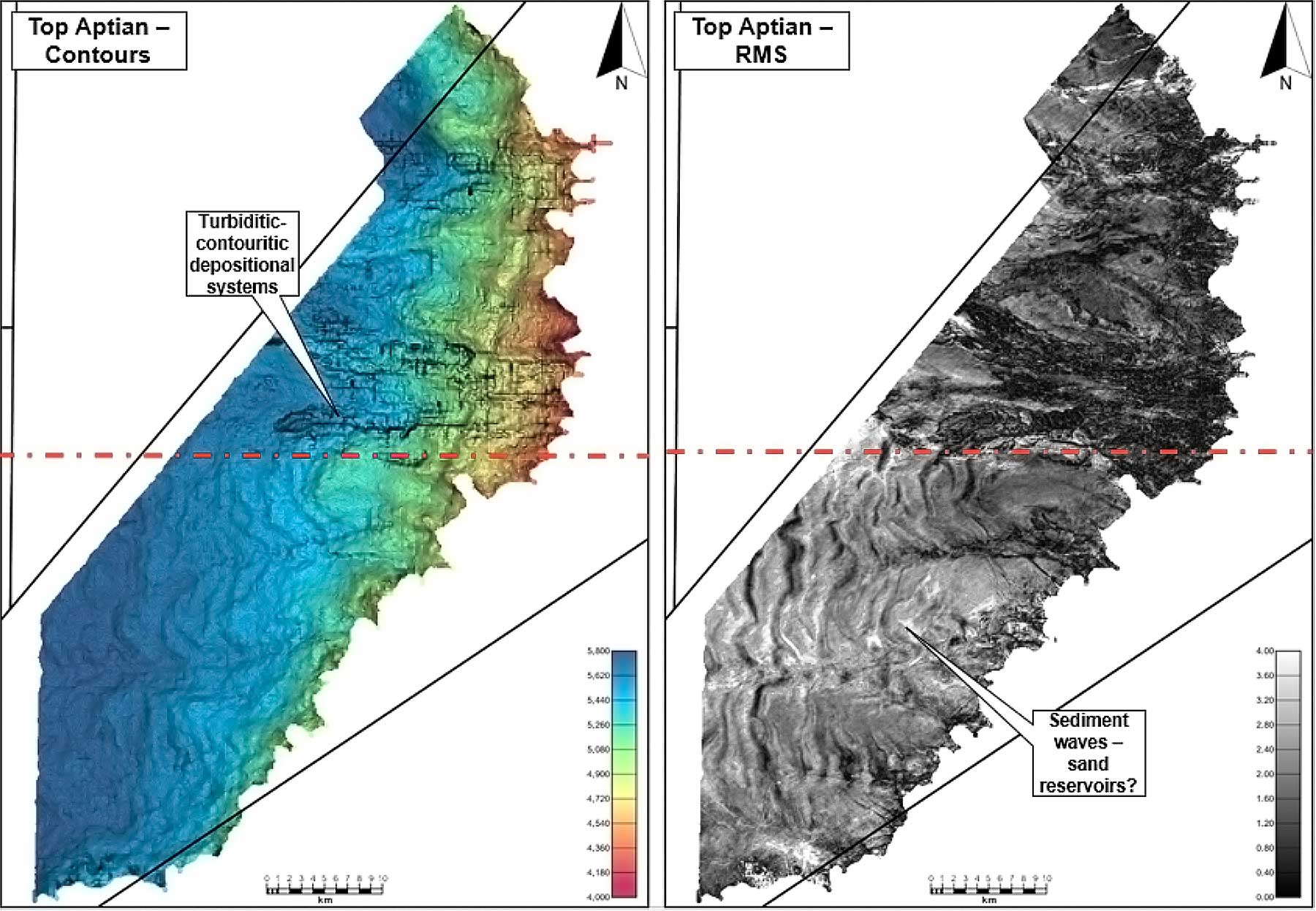 The Aptian sand filled traps are most likely charged with oil from the interbedded shales as well as from the underlying Barremian. This stratigraphic section consists of black shales in the Atlantic basin and they are mature for oil. These source rocks have been drilled elsewhere in the MSGBC and they are of a high quality.
The traps in the Aptian are difficult to map directly off the 3D but the AVO anomalies are clear so mapping the brightening on the Fars provides the prospect definition. The location and size of the traps are shown below.

The Albian in Block 4B is abnormally thick which is not a surprise upon viewing the feeder channels on the Shelf. The channels feed directly into distributary channel systems and associated fans in the basin, and these are clearly evident on the seismic and the maps below. Channel switching exists and therefore sand continuity is likely to be significant, but conversely the risk must lie with sealing of the units. Nevertheless, the AVO anomalies provide great encouragement.

The stratigraphic section under the main unconformity on the shelf edge in Block 4B is deemed to be Neocomian in age and as such the control on the exact type of sediments to be drilled is poor as no wells have gone below the Barremian. Based on regional geology we expect the Neocomian and underlying Jurassic to be shelfal carbonates although we do see strong evidence of progradation and some channelling. Basic inversion work performed by DUG highlighted areas within structural closure of reservoir karstification.

Nevertheless, there is over 80 sq km closure with over 1 km of overburden and interestingly, where the channel fill is observed, there is a noticeable gas escape feature running to surface. 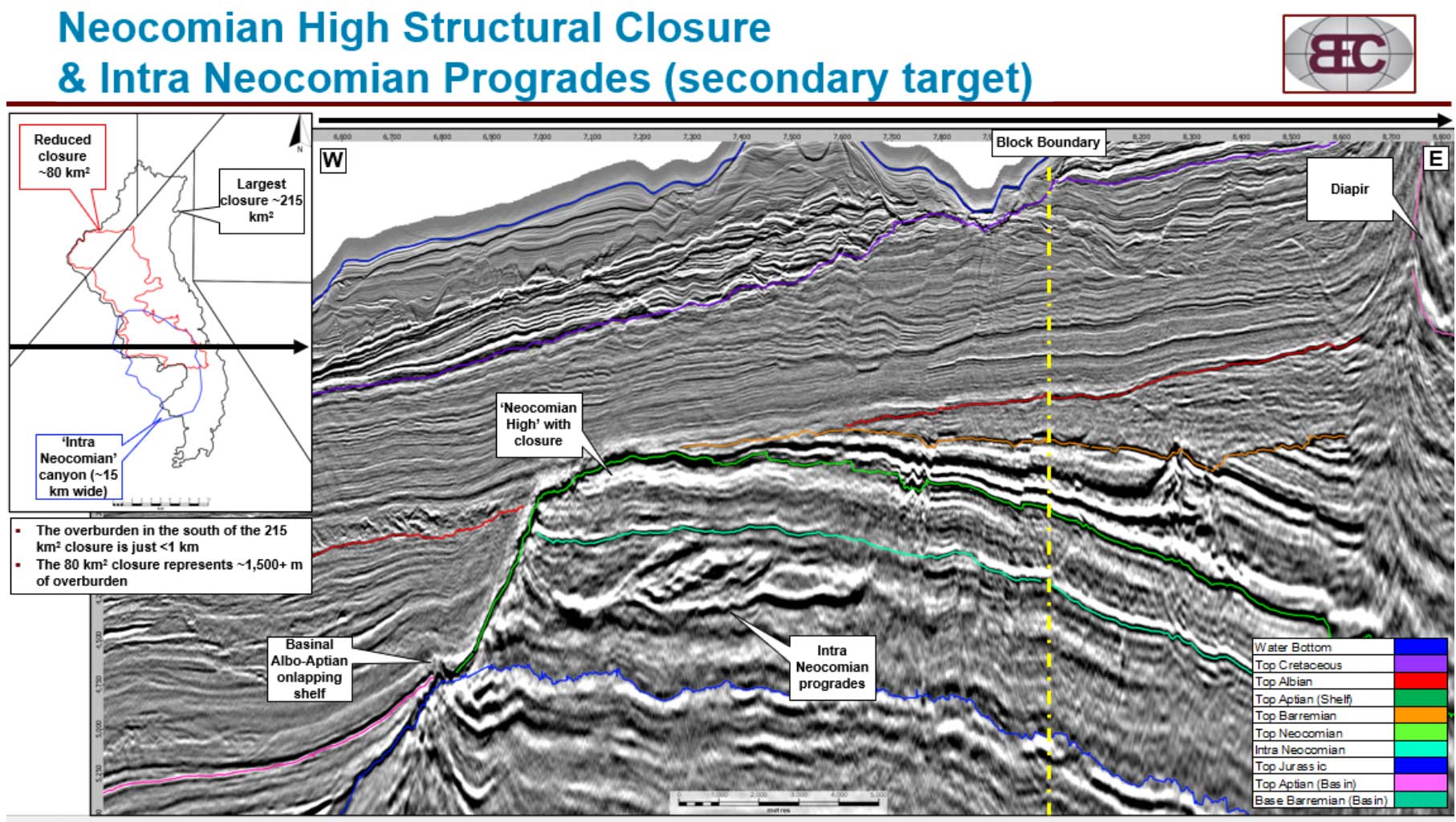 In terms of a hydrocarbon charge into the Neocomian we know the underlying Jurassic has contributed to a petroleum system as there is an oil seep onshore Conakry, typed to be from a Jurassic source. There is also a condensate seep in Bissau that is typed from either Jurassic or early Cretaceous and both these source rocks will be deeply buried in and around Block 4B. Finally, there is always the chance of a hydrocarbon charge coming across/up the main bounding fault or even up the dip slope. At the base of the dip slope as one enters the well documented salt basin, there are several proven source rocks in the Lower Cretaceous. These same source intervals are juxtaposed against the Neocomian across the main bounding fault. Hydrocarbon charge, whilst not clearly controlled, is not seen as a major risk.

The size of closure of the Neocomian High offers the potential for significant resources but with no information on the reservoir it is difficult to be definitive on volumes. CNOOC are planning to drill the Neocomian in the Wolverine prospect across the border so the play on Block 4B will be de-risked as it is the same source charging the same reservoirs in the same structures.

Block 4B in Guinea Bissau offers a wealth of opportunity with shelfal and basinal plays and large prospects at four stratigraphic levels. Water depth is between 1,200 and 3,000m dependent upon prospect and a well needs to be committed to in 2024.

BEC has 90% equity and is looking for a clean exit although they will take risk (and reward) on the first well. Back costs are $10m for the seismic and about the same for other costs including signature bonus.